So, Apple announced a few things today at the WWDC. iOS5, and iCloud. I could talk about Lion (and how they are killing the DVD install and only making it available to download by the App Store) or iOS (And the notifications features, iMessaging and how that will piss the Carriers off) but i wont… At the moment i am going to talk about the iCloud feature for storing music you have already bought on iTunes in the cloud…

So, how does it work? Currently, if you buy music or music videos from iTunes, and you loose it (hard drive failure, etc) you can request to get it back, but only once… after that, its lost. if you dont learn to backup the first time, you’re screwed… With this feature, Apple does the backing up, but also the syncing.

The idea is as follows: You buy music on your iPhone. It is downloaded to the iPhone, but it will also sync back to your iPod or iPad, if they are setup for it. It also means that if you loose your iPhone, and buy a new one, all your music that you’ve purchased can be redownloaed to your device, without the need to repurchase it. handy!

Another interesting feature they are adding, but it is not live yet, will be iTunes Merge: basically, it looks at the music you have in iTunes, figures out if there is a copy of it available on the iTunes server (in the store) and if so, copies their version to your iCloud storage (guessing they aint actually copying it, but more linking it). Anyway, this makes me wonder… does this now validate the music that someone may have gotten by non legal means? i mean i can understand them validating music that was ripped off CD, but how do they know?

Anyway, the feature for Purchased Music and Music Videos, aswell as Apps is now live. Some screen shots below. 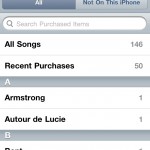 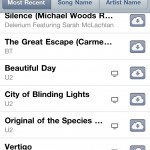 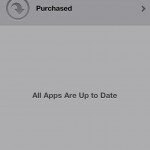 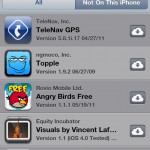